Simple steps to harden your SSH setup on a VPS server

Last week 813 customers started with us!

Simple steps to harden your SSH setup on a VPS server

Let's imagine you have already setup a SSH key based passwordless access to your VPS server. It is already much safer, compared to traditional password-based access, however still not secure enough. In a modern world there are a lot of already well-known methods of server-targeted attacks, and there are also some methods to make your SSH server more secure. Hardening is a specific term in IT world, that is usually related to reducing the attack surface of your system. I will describe a few easy to apply ways of hardening your SSH server. Statistics show, that if some service is hard to quickly hack with generic approach, unless you are a top priority target, attacker will prefer to move to another target. So even if you use your VPS server for your hobby, development project, personal web-site or anything else, probably not looking very valuable for an attack, you still better secure your ssh connection to save a lot of time in future in case of succesfull attack.

2) Key based ssh access, if you have not done it yet. You can follow our guide[1] to do so.

Change the default SSH access port.* By default ssh service is listening at port 22. Changing the default port makes a number of potential attacks much smaller, since attacker do not only have to attack your server with often automated software, but to find out the port, your SSH service listens on. Ports from 0 to 1023 are reserved for well-known ports, 1024 to 49151 are registered ports, 49152 to 65535 are dynamic/private/testing ports, so better choose the port either from the 1024 to 4951 region or from the region 49152 to 65535. Technically you can choose any port, but to avoid potential problems 49512 to 65535 is the best choice. Let's choose 49513 for example. Check if someone has already changed the port. Possibly not, if you have already accessed your VPS with a standard 22 port :)

As you can see, port string is commented. Let's change it by uncommenting the string and changing the port to 49513

Just in case, check that this port is not used by any other software by running

Check status of service ( that it had restarted OK ), and check that your sshd service is now listening on a new port

Careful! You ssh session will not be dropped immediately, but next time you will need to connect using a new port.

Disable v1 protocol for ssh service* SSH supports two versions of protocols: 1 and 2. 1 is much less secure and has many vulnerabilities. Let's force ssh to use only protocol v2. open /etc/ssh/sshd_config and add a string

Disabling root login, and adding a specific user to access your server* By default VPS server has a root user, so by default you are logging in with a root permissions. It is better to create a specific user for ssh access, and only after accessing system with your specific user, switch to root Let's do it: Create user and password

Do not forget that if you have properly setup your server password-based ssh access is already disabled. let's populate authorized keys for that user with a list of trusted keys, that you already have for root user ( and copied to newly created user ).

You can also follow the key creation tutorial from this guide[2] and repeat it for your new user.

Now try accessing your machine with that user and a key, that you have previously added for root user. So now, you can access the machine with a non-priveleged user, setup a sudo access for it. By default our sudo is configured to allow password-protected sudo access for users in group wheel. Add your user to wheel group 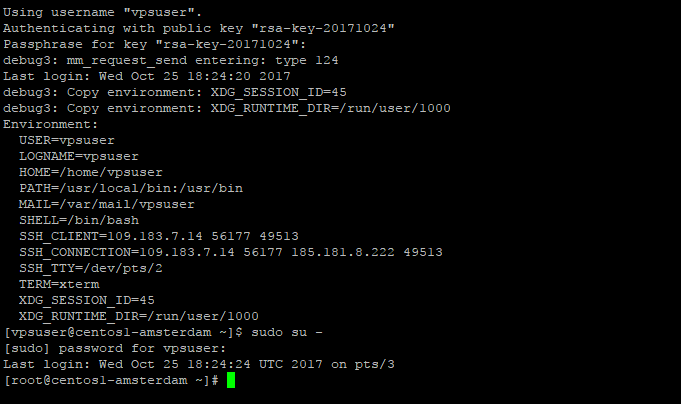 Now you can disable root login for your VPS server. open /etc/ssh/sshd_config uncomment and #PermitRootLogin yes string, and change it to PermitRootLogin no

restart sshd service. IMPORTANT: Carefully check that you can access VPS with your user, and that sudo works, prior to disabling root login and restarting sshd

You will immediately lose session and will have to relogin with that user, you have created, enabled key-based ssh access, and sudo priveleges.

Limit the number of users, that can access your server:* Let's imagine you have a lot of different unpriveleged and priveleged users on you machine. In most cases, you want to be sure that only a certain number of users can access your machine. For example in our case you have decided, that only vpsuser, we have created before, will ever access our VPS through ssh. All other users, even created in future, will not be able to do it. Open /etc/ssh/sshd_config and add AllowUsers vpsuser string to the config file.

You can also limit access to a specific group, using

restart ssh service and check that it is running ok

We completed a few steps that are fast and easy to implement, to not change the behaviour of your VPS much, but noticeably harden your setup. It is recommended to always make your ssh access secure, so that your VPS server is not hacked by some kid with a generic hacking software.